Aircraft manufacturer Airbus has announced, that it will offer a new version of its popular A321 series. The so-called A321XLR is set to become the single-aisle airline with the longest flying range. XLR stands for Xtra Long Range, meaning the aircraft is capable of flying up to 4,700nm without refuelling.

According to the manufacturer, Airbus received very positive feedback from the market for an aircraft that can fly longer range. Now, airlines are able to use the next evolution of the A321 to service new markets. In addition to the range, the aircraft will also bring a 30% lower fuel burn per seat. Airbus will start to deliver the first XLR aircraft in 2023.

Airbus said, that the A321XLR can operate flights from India to Europe or from China to Australia. Additionally, the non-stop reach on transatlantic flights between continental Europe and the Americas could become important for operators.

In a statement, Airbus wrote: "The A321XLR has been designed to maximize overall commonality with the A321LR and the rest of the A320neo Family, while introducing minimal changes needed to give the aircraft an Xtra Long Range with increased revenue payload." 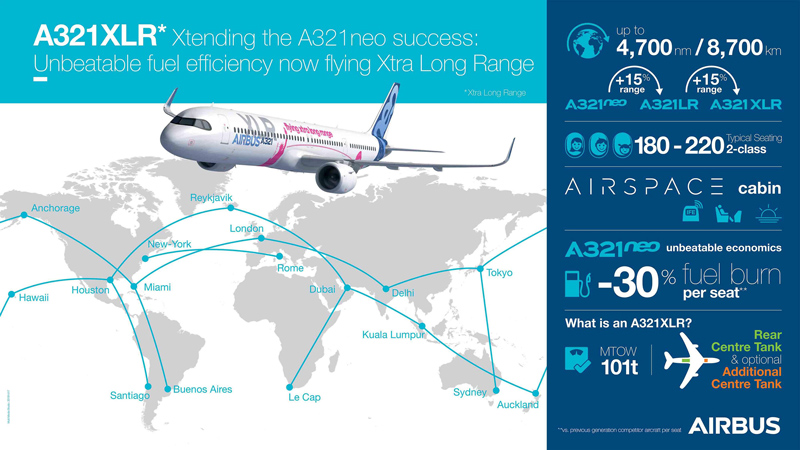 The changes are a new permanent Rea Centre Tank (RCT) for more fuel volume, a new landing gear that enables an increased maximum take-off weight of 101 metric tonnes, and a new flap configuration, which preserves the same performance requirements as the current A321neo. Additional Centre Tanks can be equipped optionally.

All in all, Airbus had a good start into the XLR programme, with several airlines backing the new product. Boeing meanwhile did not announce a Middle-of-Market aircraft on the PAS19.

Register a free account and connect with the aviation community today.

This site uses cookies. By continuing to browse the site, you are agreeing to our use of cookies. Learn more